Posted on December 10, 2020 by Matthew Phillips

“Greetings.  On December 10, 1520, at nine o’clock in the morning, all the following papal books were burned in Wittenberg at the eastern gate near the Church of the Holy Cross: the Decretum, the Decretals, the [Liber] Sextus, the Clementines, the Extravagantes, and the most recent bull of Leo X; likewise the Summa Angelica, Eck’s Chrysopassus and other books by this author, writings of Emser, and certain books that were added by different people.  This was done so that the incendiary papists may see that it doesn’t take much to burn books they cannot refute.  This is the news here.” Martin Luther, Letter 67 to George Spalatin, Luther’s Works 48: 186-87.

Martin Luther wrote these words to George Spalatin, the court chaplain and secretary to Frederick III the Wise of Electoral Saxony on December 10, 1520.   Luther wanted him and others to know that he and his colleagues had defied Pope Leo X’s condemnation of his teachings in the Papal Bull, Exsurge Domine.  Luther had received reports that some authorities had burned some of his writings in other parts of Germany. 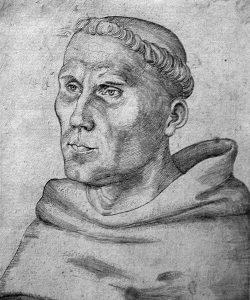 Luther’s colleagues, Philip Melanchthon and Johann Agricola organized the event and some students attended.  Luther personally threw a printed copy of Leo’s bull into the fire.  However, the other works that Luther identified held great significance. The Decretum through the Extravagentes contained the full collection of the medieval papal canon law reaching from the mid-twelfth through the mid-fifteenth centuries.  These texts were the legal basis for papal authority and burning them was an incredible act of defiance against the papacy.  The other books included a handbook to guide priests hearing confession (Summa Angelica) and the works by two of Luther’s early papal opponents: Johannes Eck and Jerome Emser.

If Luther’s publications were a theological turning away from the late medieval papacy in 1520, then the public burning of the bull and the canon law represented a public display of that reality.  Before the end of the year, Luther published an explanation for these actions.*  Since evil books should be burned, Luther reasoned, then destroying these false works of canon law and papal theology was the proper action.  He then listed thirty articles of errors from the papal works including the pope’s grandiose claims to authority in church and world and the confusion of papal law and the gospel.**

This entry was posted in Martin Luther, Reformation. Bookmark the permalink.