“On the remedy of the Passion others have said that it is understood in justice and mercy. For our Savior, although He was all powerful, was able to free man (hominem) from the power (potestate) of darkness by the word alone of his own power (virtutis suae).  But in our liberation, He preferred justice rather than power (potentia), because the devil is a lover of power, [but] one who forsakes justice.  In whom men (homines) preferred to imitate him who desire power and hold hatred for justice. What is that justice?  Listen.  Christ is innocent, and free from all sin.  He alone is free among the dead; not having the cause of sin but [He is] under the author of sin.  Just as He himself said: “the prince of this world comes, and he has not found anything in me [John 14:30].” Richard of St Victor, Sermo in die Paschae, PL 196:1069 [my translation] 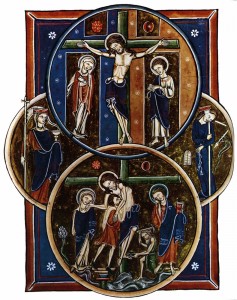 In this sermon for Easter, Richard of St Victor (d.1173) preached on Christ’s redemption of sinful humanity.  While he wrote many theological and devotional works related to medieval Christianity, as a teacher and prior, he would have preached too. When Richard wrote, “others have said,” he was referring to earlier debates among theologians about the relationship between God’s justice and the devil’s power.  Anselm of Canterbury and Hugh of St Victor (the first great teacher from Richard’s abbey) had both written about these debates in their famous works.  Richard seems to understand the basic ideas and combines various elements of different theories of redemption in this sermon:

“There was nothing in Christ found from [the sinful world’s] complete substance, nevertheless [the devil] killed the innocent One, and therefore [the devil] was commanded to draw back from those guilty ones who flee to Christ for refuge.  [The devil] killed Him who owed nothing to death, and [the devil] was commanded to draw back from those debtors of death who believed in Him who died for them.  Moreover, in this [action] the mercy of our redemption is indicated:  By His own charity and with compassion for our misery, Christ endured death in obedience to the Father and in this [action] itself itself He merited much before God the Father and he granted His own merit to His members. In His own Passion, He destroyed him who had the authority [imperium] of death and atoned for the guilt of man (hominis) and reconciled the sinner to God the Father, and just as David killed Goliath with his own sword, so Christ destroyed the devil with his own weapons.” Ibid. [my translation] 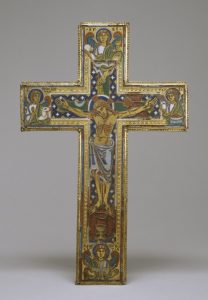 Motivated by love and compassion, Christ became a human being and allowed the devil to murder him with his temporal power.  However, now the devil attacked an innocent man who paid the debt for all his fellow human beings.  He paid the debt of death and gave the merit He earned to those who believe in him.  Thereby, He removed humanity’s guilt and reconciled God and sinners.  Instead of using his divine power against the devil and for humanity, Christ used His human weakness in his suffering to overcome the devil and redeem sinful humanity.  In this way, He revealed his justice and mercy as the only real power.